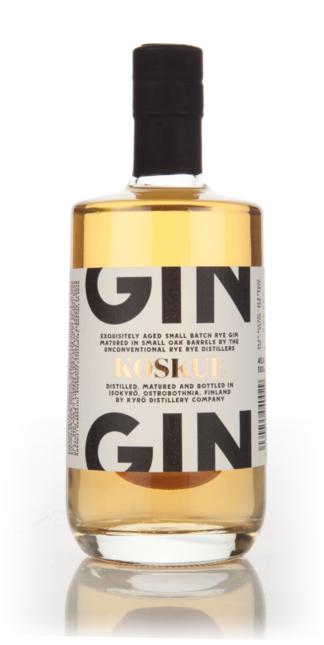 We’ve reached a point in the Gin Renaissance where to merely point out that a Rye Distillery, a five hour drive north of Helsinki is now producing a Rye based barrel aged gin, and that fact alone doesn’t warrant quite the same level of remark.

All of these facts being true, the Kyrö Distillery Company took over a cheese factory in Isokyrö in 2014. Their gin(s)* take a little bit of local, including four botanicals foraged locally to give it that “little bit of Finland” feel. Koskue is aged in “small barrels” for “enough time.” They’re aging their Rye in New American White Oak, so I can guess that might be their choice, but that’s not said for sure. All we do know is the resulting the spirit has a vivid golden hue to it. But how about the taste? I am glad you asked!

Koskue has a definite wooden edge on the nose, but an also clear citrusy/floral edge, underneath which lurks a sweet creamy vanilla aroma. Certainly oak, maybe a touch of orange, lemongrass, daisies and jasmine with a touch of cinnamon spice.

On the palate, there’s a really pleasant spruce tinged, wooden flavor. The spirit is rich and thick conveying touches of anise, caraway, bitter orange seguing into a spicy peppery finish. I really like the myriad of moments/notes in this gin. You may stop at one moment and pick out some honeysuckle and honey, and another you’ll get lemon pepper and anise. The finish is quite long, with a slight lemony and juniper branch like astringency. Very drying, it will certainly clear your palate, whetting it for the next sip.

Spicy and piquant, Koskue where it’s Rye base on its sleeve, starring as much as the botanicals or the delightful oaked notes.  Very pleasant aged gin that shines in classic cocktails, bringing spice, spruce, and floral tinges that  evolve and unravel  on the palate as the spirit warms the throat and heart. This is a great aged gin for sipping on those cool autumn nights and proof that you don’t have to put away your gin after Labor Day.