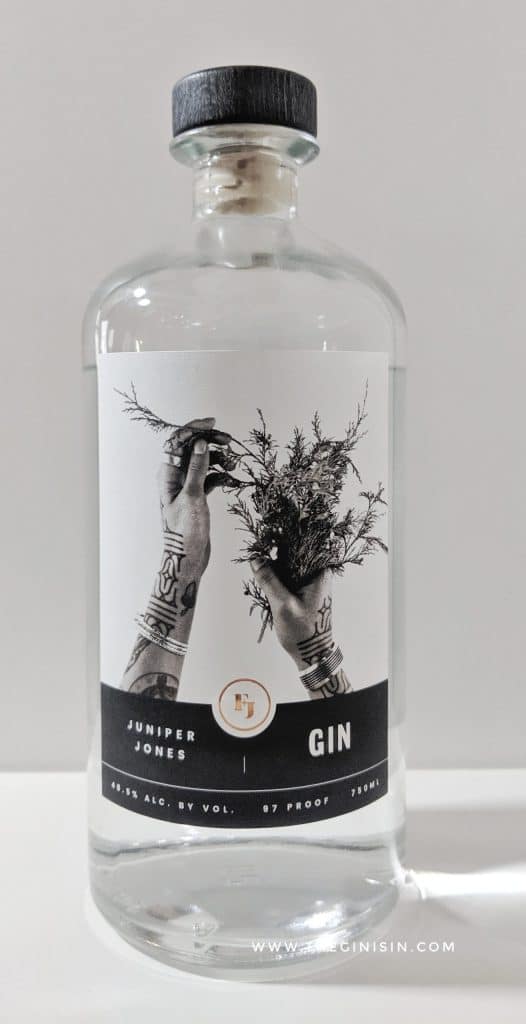 Distiller Rob Masters has been around the Colorado gin scene since pretty much the very beginning. Some of his early work including Rob’s MTN Gin and his work with Spring 44 garnered great reviews— not just on this site. Juniper Jones Gin is his latest, borne out of his work with the Family Jones.

So-called because the men involved likened their partnership to choosing your own family as adults.

Juniper Jones is designed as a split between the contemporary and classic styles of gin— what writer David T. Smith likened to a “Trans-Atlantic gin.” Masters adds all the botanicals into a pot still for a period of maceration before distillation. It starts as a base spirit distilled from grain and is diluted with— of course it’s Colorado— Rocky Mountain water.

The nose is strikingly classic in presentation. Soft, mellow juniper with an herbal facet takes center stage. A slight earthy nuttiness with a cubeb facet rounds things out. Despite being 97 proof, Juniper Jones Gin has a mild nose, but no ethanol or heat bursts out.

The palate is thick early on with a lot of juniper. This time the juniper is full on, thick, piney with sap— citrus, in particular oily, bitter orange comes out mid-palate. The coriander is contributing a touch of jamminess here giving impressions of Concord grape.

Things settle down as the the finish of Juniper Jones brings hints of cacao nib, fir sap and stewed dill. There’s a warm background suggestions of dill Aquavit here. But ultimately juniper is the star.

It’s higher ABV mirrors others that are carving out a niche in the territory between premium and Navy Strength. Bartenders I find quite like the way these mid-to-high ABV’s work in cocktail craft. Juniper Jones can stand out in a Negroni, but also is light enough to be diluted and drinkable in a Martini or Gibson.

The juniper notes sing with tonic, while some of that later complexity really shines in a Tom Collins or Gimlet. Cocktail-wise, Juniper Jones Gin’s classic side comes out most strongly.

Juniper Jones is another strong gin in Rob Masters’ portfolio. It hits the ABV you’d expect from a premium gin, while taking a lot of what makes a lot of classic-style gins work well. But Juniper Jones isn’t a paint-by-number approximation of classic gin. Masters pushes the envelope with supporting botanicals that create a novel, but ultimately familiar gin.