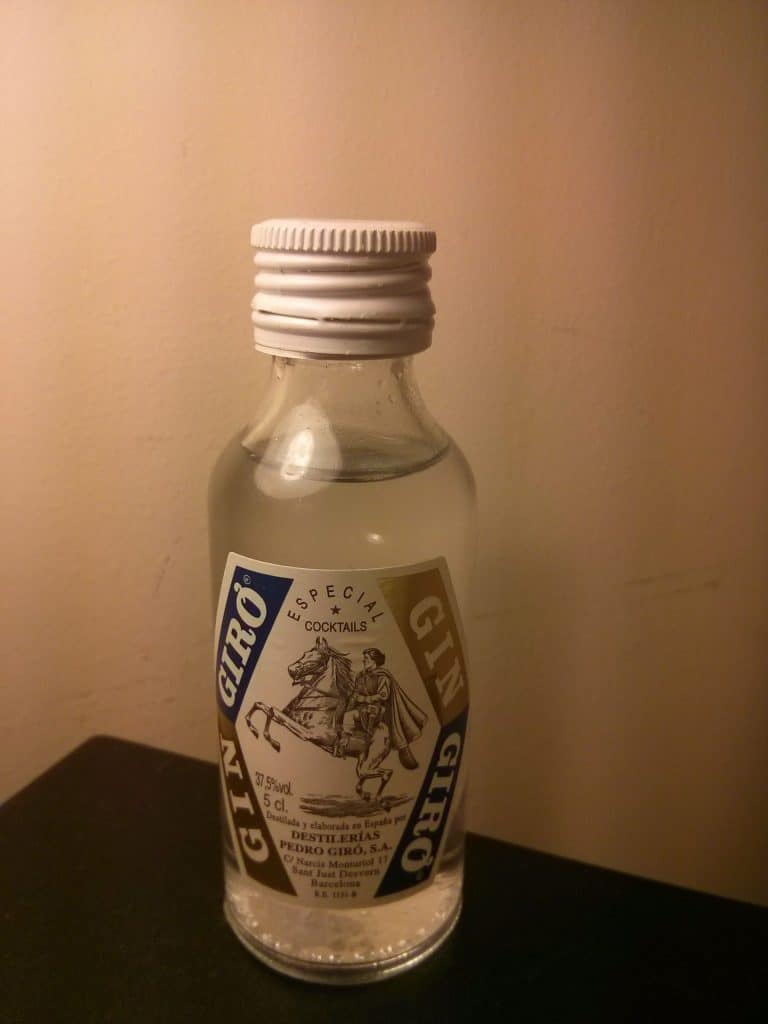 Spanish Gin is perhaps slightly undercovered here on The Gin is In. So special thanks goes to David, my chum over at Summer Fruit Cup who scored me a couple Spanish gin samples including Giró Gin. A lot of the Spanish gins I’ve covered in the past have been really out there: some green, some purple, some flavored with eccentric botanicals. But instead, today we have a Spanish gin who predates the contemporary gin revolution by no small amount. Giró Gin has been around since 1930, and it has a much more illustrious history when compared to other Spanish gins we’ve covered. And at a relatively inexpensive price of $13/L, this is truly a people’s gin if there was one.

The nose of Giró Gin is strong, a good deal of ethanol, but with a faint, and quite pleasant notes of juniper and orange behind it. A bit harsh, but quite gin like, and not all too different from many inexpensive gins.

The palate is a bit stronger and colors in the notes of the nose vividly. Juniper at first, a rich earthy middle with coriander, angelica, and then suddenly and boldly a really quite surprising finish. There’s a briney, salty, and somewhat vinegary note on the close. I wrote in my notes, black pepper, “olive” and “pepperoncini” hot peppers, without the capsaicin. The finish is faintly with still a touch of citrus and vinegar. Very interesting. I’d say this is not at all like the expected harsh juniper of many inexpensive American brands. It’s loud and its actually quite unusual. The vegetal notes on the end are most peculiar, and although I doubt that peppers or olives are among the botanicals, there’s some interesting harmony and dissonances that actually make this rather intriguing.

I mixed Giró Gin up in a gin and tonic with Q tonic. The earthy notes became a little bit more distinct. Hints of mushroom and a touch of fruity tang. Decidedly weird, though with fresh lime it took on a slightly more expected tenor. But wow, still really surprising and different.

In the martini, I felt that Giró Gin lacked the smoothness I would have liked. Giró Gin did shine boldly, but it seemed out of sync with the Vermouth. Noisy, complex, and a little bit off.

I thought it was better in a Negroni. It came across as a little bit earthy, a little more gin like. Restrained, and somewhat held in check. Interesting and not without its merit, but not quite one of my favorites.

My overall sense is that Giró Gin makes a fine mixing gin, and can be used in a wide variety of drinks without throwing the balance too far off. I think folks who like a good cheap juniper forward gin may want to look elsewhere, but others, especially those who are curious about the origins of the loud Spanish gins that we are seeing in ever greater numbers, you may want to look to Giró Gin to see where this began. A gin wholly unlike most gins on the shelf during that era, it is unique and interesting, although lacking in the qualities that might have seen it work it was into my liquor cabinet. An interesting gin worth trying, and not much more.