This is part of a series of three Gin Reviews where I experimented with Ginbrew’s Blue Ruin botanical blend. I tried making the same bathtub style gin using three different methodologies and compared the results. To see, if perhaps there’s a best way to make a bathtub style gin.

All three of the approaches use Reyka Vodka, which is an Icelandic vodka distilled from Barley and Wheat. 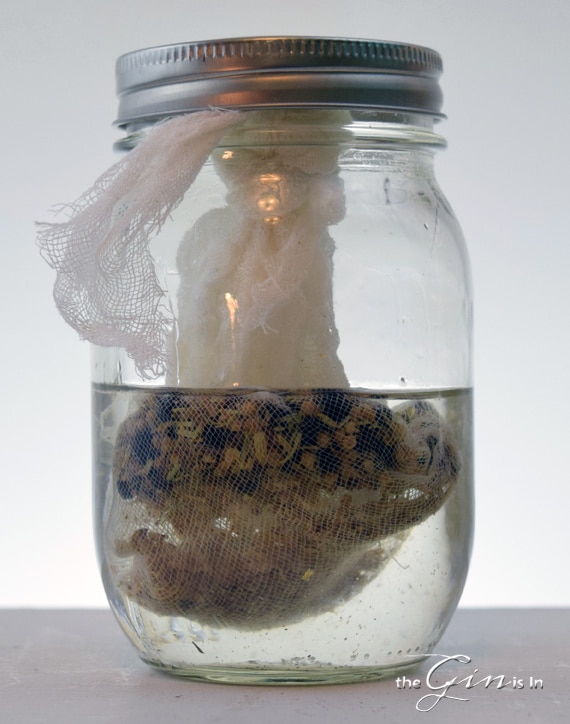 Among some of the more recently released homebrew bathtub gin kits, I’ve noticed a tendency to put the botanicals in a tea bag rather than to drop them directly into the spirit. Methodologically, this seems fairly similar. You’re putting the botanicals in the vodka and bringing the spirit into surface contact with the botanicals. However, many gin kits encourage you to “shake your gin” once a day while resting it in a dark place. When shaking the bottles, it can sometimes disturb the botanicals and create more sediment. I wasn’t sure if the teabag actually makes for a better bathtub gin (aside from easier cleanup), but we nontheless put it to the test.

I didn’t have a tea bag creation device at home, so I devised a two layer one out of the cheesecloth.

I then put the spirit in the freezer for six hours and then double filtered through a very fine filter to remove as much particulate as possible. The resulting spirit is a fairly translucent orangish brown. Color-wise it’s about as dark as most bathtub gin kits after the same amount of time.

The nose is milder than the gin produced through the gravity filtration method. Juniper, sweet coriander, chewy fennel seed, and vanilla notes.

The palate is much more heavy with the juniper than the aforementioned method, especially towards the start of the palate. Resinous juniper with herbal hints of rosemary and lavender; the mid-palate is sweetly spicy. Cinnamon stick, nutmegs, fennel, cinnamon cake, spice cake, and then towards the finish there’s some musky low vegetal notes along with some cardamom adding brightness. The moment between the cinnamon cake mid and the cardamom finish is a deep, earthy melange of soaked greens, damp boards and grain.

The finish is zingy with spice cake with a slight sourness and dryness. There’s a long ringing echo of cinnamon and fennel on the palate long after the sip.

There’s more juniper here, but it’s largely representative early on, and more of a background player later on when the spice orchestra kicks in.

Unfortunately, bartenders and home cocktail creators concerned with aesthetics may find that Ginbrew Blue Ruin leaves them a bit wanting. It tends to make undesirable color combinations with most mixers. Even the Gin and Tonic and Gin and Soda had an unfortunate dehydrated yellow hue to them. Flavorwise, it’s not too bad. The brightness comes through, though especially chilled Ginbrew Blue Ruin is about the spices.

I thought it made a good Negroni and an intriguing flavored Martini, though the aforementioned comment also applies here.

I didn’t find a radical difference between the bag method and the usual maceration and shake method. As far as bathtub gins go, Blue Ruin adds more juniper after a longer resting period, but it also adds some dark, muddy notes that make it a little less mixable. It’s okay, but flavorwise it’s more of a curiosity than a serious gin replacement.