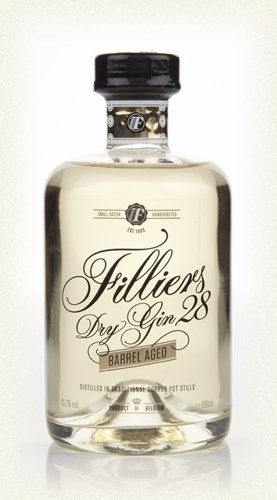 Barrel Aged Gins like Filliers Barrel Aged Gin are slowly becoming popular on both sides of the ocean. No longer is the domain of barrel aging a product, one not normally barreled, the exclusive domain of American distillers experimenting with their future whiskey barrels. Though it does still seem to be more common among distillers who also dabble in the dark spirits.

The Filliers family can trace their distillery’s origin back to a member of the family who distilled a Genever back in the 1700s. Enter today, the family name is still carrying the banner high. The Filliers’ distillery, in addition to the family Genever, also produces whiskey, and their namesake “28” gin, so named for the other 28 botanicals which are added to compliment the juniper. Like all families with multiple trades, their Filliers Barrel Aged Gin puts the best of their gin world (28) with the best of their whiskey world (the barrel) and produces a wholly new product.

The color of Filliers Barrel Aged Gin is somewhat blonde, or champagne colored. It has only a faint yellow hue to it, remarkably lighter than other aged gins we’ve tried here.

The nose is at first oaky, but it quickly unravels revealing more depth: juniper, lemon and butter dominate at first, before faintly dissipating. The mid and low notes are still of the same ilk, but with a touch more ethanol on the nose.

The palate of Filliers Barrel Aged Gin begins with just a touch of heat before juniper and coriander begin to come through. Warm, very gin-like spice emerges and this is where things gets interesting. Other notes begin to bubble up mid-palate where a fruity, almost strawberry and pomegranate note comes through. As it becomes clearer, that fruity note becomes more obvious and lemon and orange. We had wrote in our notes “orange spice cake,” and “lemon loaf”*. More specifically, as we look a bit closer, notes of vanilla, butter, orange, and lemon come through. It’s really quite startling and refreshing. It fades into a finish that is a touch butter and oak. Quite interesting, and although not as powerful as other aged gins, it was worth sipping on its own.

Given this was another small sample from my good friend David T. Smith (of Summer Fruit Cup renown), we had remarkably little left to make a cocktail out of after the initial tasting. So we did the only thing that made sense: The Negroni. Even with the other ingredients, Filliers Barrel Aged Gin’s spiced orange cake notes came through again. Clove, cardamom, cinnamon, orange. A note or burnt citrus rind in the middle, long smooth finish primarily dominated by Campari. Although we didn’t get to try it much, in the drink we did try it in: we were impressed. Highly Recommended.

An interesting aged gin wherein the aging imparts a rich buttery complexity, while limiting the outright oak/wood notes to a bare minimum. While the aging is subtle, the effect is well executed and the outcome is a rich, buttery spirit that’s a good ingredient for cocktails, in addition to something worth sipping on its own.

*Is Lemon loaf even a thing? I’m pretty sure it’s just a lemon cake that my mom used to make in a bread pan. I googled it and apparently, it actually is a thing. So I should say, that the note should read, “It reminds me of what the loaf in this picture tastes like.