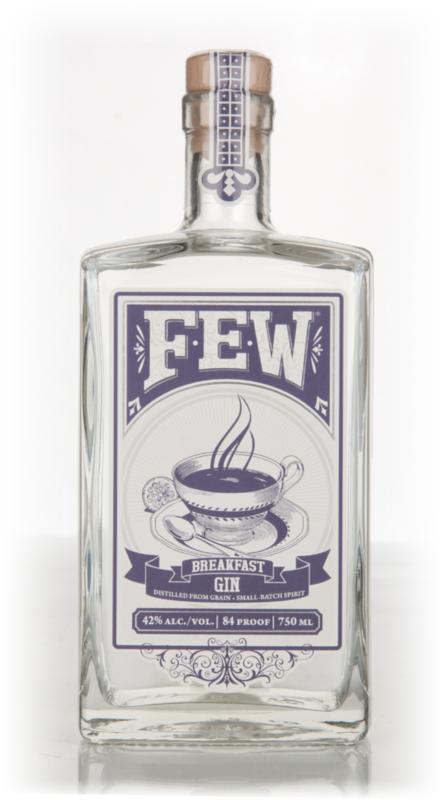 Gin for Breakfast is less uncommon than you might think at first blush. How many times have you seen a French 75 on the brunch menu? Or perhaps an Earl Grey tea with a full English? Or perhaps even Few Spirits Breakfast Gin?

Few Spirits’ Breakfast Gin targets the brunch market with a cocktail-making gin specifically designed for pre-noon drinking. The gin includes Earl Grey tea as a botanical, along with lemon, juniper and other more traditional gin botanicals. Like other Few Spirits Gins, it has its complex, grain-forward base made from corn, wheat and barley.

The palate explodes with rich, powerful, heady notes of Earl Grey Tea, including a hefty dose of bergamot oil and strong brewed black tea. Mid-palate, some of the signature Few creaminess emerges, with lemon, cinnamon and juniper coming through; suggestions of creme anglaise with vanilla bean paste. The finish has a lot of dryness, that when accompanied by black tea notes, calls to mind unsweetened black tea with a hint of baking spice. Medium long, quite dry finish.

Although specifically designed for brunch, I felt Few Spirits Breakfast Gin made a less bright than expected French 75. The tea notes and the subtle malty flavor buoyed by Champagne effervescence just isn’t working for me. I like the combination of lemon and the Breakfast Gin, but the cocktail just tastes darker and less refreshing than I normally think of a French 75 being.

That being said, let’s take what works: the lovely tea notes and the combination with lemon. Perhaps you can heat some up with hot water, maybe a cinnamon stick? Yes, I think it makes a really top notch Hot Toddy, perhaps best suited for a dessert by the fire.

That’s not to say I am opposed to having gin for Breakfast. Far from it. It’s just that I think that Few’s Breakfast Gin works best in other cocktails like the Negroni or the Tom Collins. A good gin, but it may not be the first one I grab at Breakfast.

An intriguing and worthwhile gin that does great things with the intriguing bergamot notes in Earl Grey Tea. It’s a niche recommendation that is clearly contemporary and all-in on the Earl Grey as a botanical. Fans of tea and gin are suggested to give this one a closer look. Fans of lighter gins and/or classic style gins may want to look elsewhere. Personally I’d make this a go-to Hot Toddy Gin, but I definitely won’t tell anyone to stop having gin for brunch.