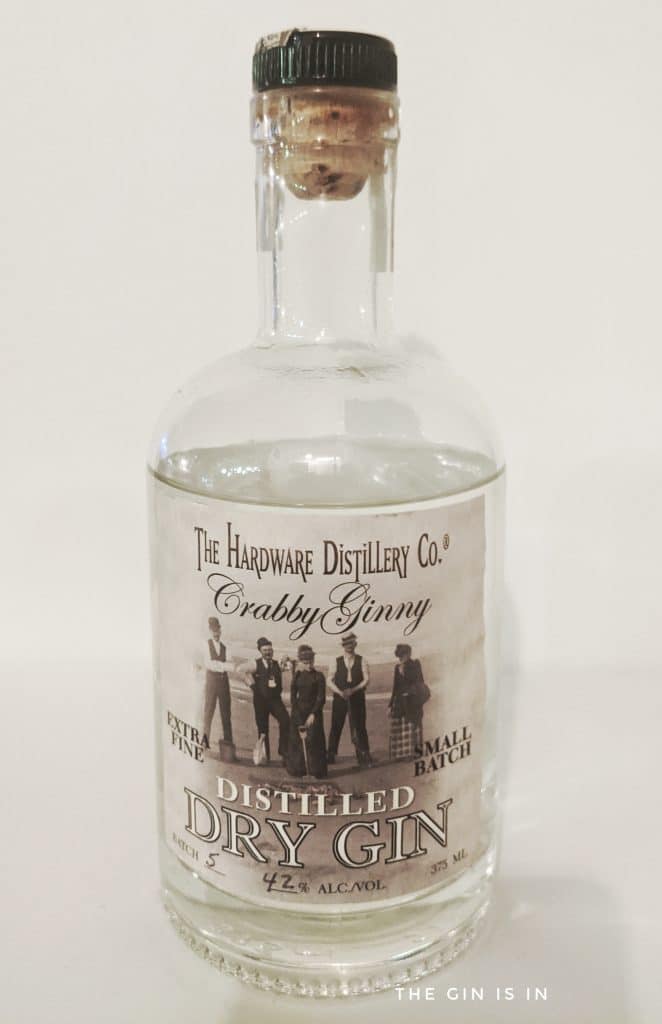 Crabby Ginny is an unusual concept in gin. Firstly it is designed specifically to be paired with food (crab to be exact). Even more unusual is the exotic base spirit that they use— Hardware Distillery makes the base for Crabby Ginny from a blend of grain, pears and cranberries.

The aroma at first reminds me of a spirit distilled from apples. Delicate crisp McIntosh apples and hard, barely ripe bosc pears are present on the nose. It’s extraordinarily fruit forward. I can’t tell is this all is coming from the base spirit or if some of the botanicals are leaning into a similar perspective. Crabby Ginny doesn’t smell like crab— it smells bright and fruit-forward.

Sipped, Crabby Ginny continues to lean heavily into the base spirit. Clean apple distillate comes on early. Feathery hints of lemon verbena mid-palate. There’s a green brightness to the mids here. Pear comes on a bit later with a moderate stony minerality.

The finish has a bit of funk— not unlike what you might get out of distilled fruit. It’s not overwhelming and doesn’t detract much. The finish is dominated by a chalky dry note and a hint of green juniper poking through.

While I sadly lack a proper crab to pair with it, The Flavor Bible does list crab and apple as a pairing idea— so Hardware might be onto something here.

As a gin, the floral and fruit-forward profile of Crabby Ginny acquits itself nicely in a wide range of cocktails. I think it works well in a Negroni, though Hardware Distillery Co.’s suggestion of the Pink Gin didn’t work as well in my book. I feel like the earthiness of the bitters took away from the lightness the gin has overall.

I think the worst thing that someone could say about Crabby Ginny is that there’s a slight funk that detracts a bit. But I find that once you mix with Crabby Ginny you generally are just left with some of the lighter, brighter qualities from the unusual base spirit mix.

That being said— hardcore fans of classic gin will find Crabby Ginny a bit light on the juniper, almost to the point of being unrecognizable as a gin. The juniper is so far in the background that you could be forgiven for thinking you’re just tasting an unaged apple spirit.