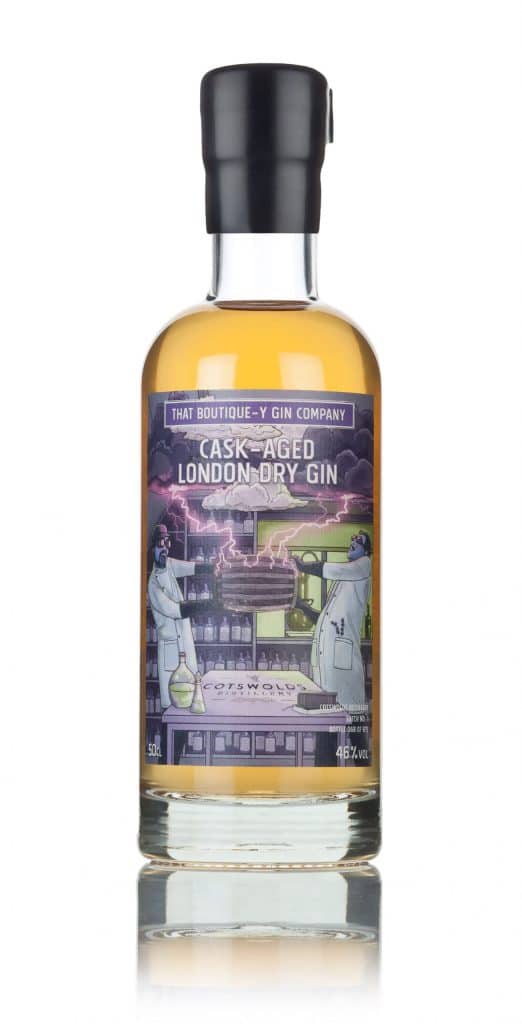 And yet another from That Boutique-y Gin Company.

In this evening’s episode.

The team, not contented enough to rest on the laurels of their previously released Barrel Aged Gin, this time in fresh ex-bourbon barrels and ex-red-wine barrels. This limited edition barrel rested gin is one of a small, but growing number of aged gins which combines two different barrel effects. The resulting spirit has a sunshine-y yellow hue and looks to be fairly modestly aged.

The palate starts with a kiss of lime before delving into its wooden heart. Clean oak, cooking vanilla, and woody juniper come on mid-palate. It evolves gentle and slowly, showcasing its spicy and more peppery side. Black pepper, fresh cinnamon stick, before reverting to its original rather citrus-forward taste.

Medium to long finish, with a mild heat and a botanical emphasis. Very pleasant and quite nice. The aging is subtle, but it’s effective.

I recommend Cotswolds Batch 1 in a Negroni, 2:1:1 to get a bit more of that warm barrel and vanilla flavor. It’s certainly good neat, but I think the botanical emphasis means that more so than other aged gins, Cotswolds Batch 1 can work in some more traditional gin drinks without overwhelming them with wood. For example, the Gimlet works quite well, less so the Gin and Tonic. I think the Corpse Reviver #2 is one that you should give this a try in, but I may stay clear of the Aviation. It’s quite flexible for an aged gin, with a nice flavor that works well in many contexts.

If you weren’t told about the two step aging process, you’d be unlikely to call out the wine barrel and the bourbon barrel. However, if the goal is a cohesive product rather than a showcase in process, the team at Cotswolds Distillery have a winner here. I think it’s a shame this is a limited edition one-off. Though I think the flavor might appeal primarily to fans of more citrus forward styles, there’s an elegant balance to Cotswolds Batch 1 that should win over even gin drinkers who don’t normally check out gins. One of my favorites in this limited edition run from That Boutique-y Gin Company.

Recommended in its line.