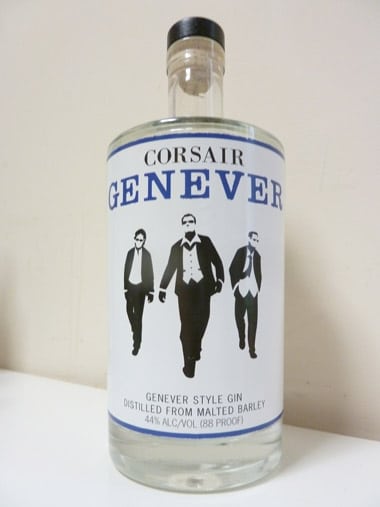 Corsair Genever isn’t technically a genever— it’s moreso a Holland-style gin influenced by Dutch schools of thought regarding genever distillation. Genever is a protected spirit category and true genever can only be made in those regions designated for its production.

However, similar to those spirits that Corsair borrows from, Corsair Genever begins with Malted Barley.

The nose is warm and malty, largely owing to Corsair Genever’s base of malted barley. There’s a hint of sweetness and spice, citrus and ginger. Gentle, an inviting aroma that could be considered subtly gingerbread.

The taste is rather sharp at first, a burst of heat. Way more intense than might be expected from 88 proof alone. Warm bread, almost yeasty, but the flavor slowly evolved turning into cranberry raisin type of bread. Notes of citrus, strongly orange, but invoking notes of lemon rind. The spices are cardamom, cinnamon, kind of spicy. Distinct notes of juniper present to, especially on the back end as it finishes in the palette. The end finishes with a bit more alcohol, malty and warm, but fading towards almost neutral alcohol.

Corsair Genever does indeed make a pretty solid Negroni. The malt-forward perspective does indeed lend itself moreso to genever cocktails like Death in the Gulfstream than to gin standbys like the Gin and Tonic or Gimlet.

I’d also suggest using Corsair Genever in a Gin Fizz for a more historically accurate portrait of the cocktail as it was drank at the turn of the 20th century.

Overall, Corsair Genever is malty and nice, perhaps a bit mire citrusy than over Genevers, but I rather enjoy it. It doesn’t taste as distinctly Genever as Bols Genever does, but on the same side of the coin it does differentiate itself from other warm grain base gins such as Ingenium Gin.