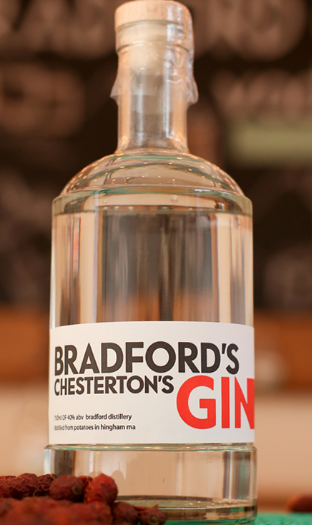 Bradford’s Chesterton Gin made by Bradford Distillery starts out as their flagship vodka distilled from locally sourced and grown potatoes. It then undergoes a second distillation with some regionally picked rose hips and local water.

Some base spirit character on the nose with an unusual combination of grass and pumpkin flesh.

The nose of Bradford’s Chesterton Gin a bit unusual. It’s intensely vegetable in character. Pumpkin is the first thing that comes to the fore; however there is much more. Hints of summer squash, pepitos, and a hint of anise make it intriguing if unconventional.

Quiet and somewhat smooth at first, a hint of vanilla leads into vegetables with a strong, rose hip jam finish— replete with warmth.

The vegetable notes on the nose are present on the palate, but a bit more subdued. The initial entry on the palate is subtle and smooth. You get a bit of an earthy must characteristic of potato spirits; clean with a hint of cream.

The finish is where some of the aforementioned rose hips come out. It reminds me a touch of rose hip jam, with some gentle spice notes or coriander and cassia.

The pumpkin/vegetal notes come out a bit more stronly on the finish, which for Bradford’s Chesterton Gin based on its proof is a bit more than expected.

In a Gin and Tonic, Chesterton’s vegetal notes and aromatic profile are subdued but still present. I wish a bit more juniper came through here. It’s autumnal and warming. Perhaps not as cool and refreshing as expected. Similarly the Gin and Soda and Gin Rickey are oddly colored by some of the botanical notes. Though I do like the rose hips on the finish especially with soda.

It works well in drinks like a Negroni, though other cocktails with the gin front and center should be treated based on the gin’s flavors rather than just a plug and chug sort of any-gin replacement.

Bradford Distillery begins with a nicely done potato spirit which highlights many of the nice things about that specific adventurous choice in base spirit.

However, I don’t think the botanicals serve to elevate what’s great about that base spirit. And while they have moments. Those moments— especially mid-palate, finish, and nose— seem disjointed, as if they could come from three completely different gins.

Bradford’s Chesterton’s Gin is an intriguing New England Gin, but ultimately one that I recommend you taste before committing to.  It’s sure to be a bit divisive. And bartenders may want to use it judiciously. Rather than just replacing any old gin with it, consider the flavor profile and mix accordingly.

Made possible through the New England Gin Exchange

Special thanks to John at Foodie Pilgrim. Since 2012, John has shared and sourced gins from New England and nearby that we at The Gin is In haven’t tried yet. This gin sample was shared by John, who is also a big fan of gin. So check out his New England Gin Reviews as well.