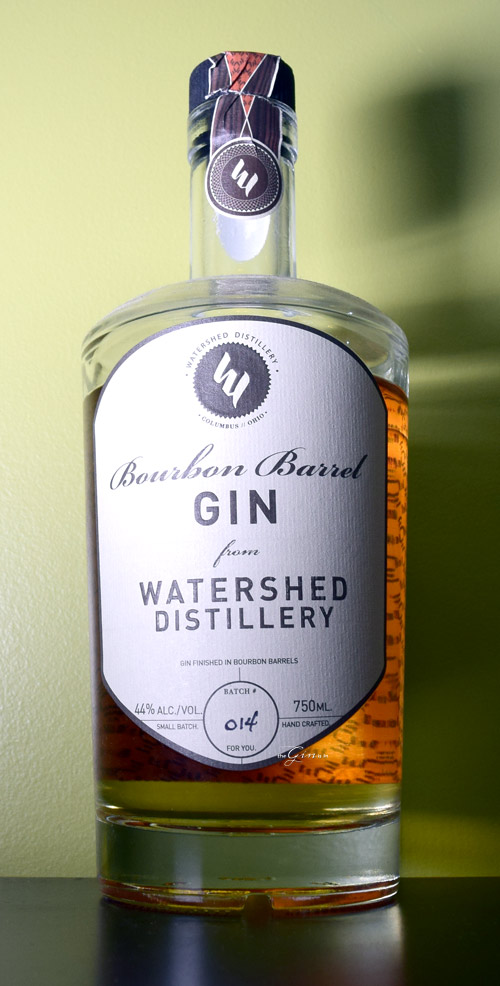 Distilled from corn, Watershed Bourbon Barrel Gin has the same botanical base as Watershed Distillery’s Four Peel Gin (Four citrus peels, get it?), also featuring performances from juniper, cassia, allspice and coriander. It’s then rested in bourbon barrels. The spirit looks like it enjoyed some quality time with the barrel, sporting a golden, maple wood hue. For this review, we’re tasting Batch 14.

Wood and citrus most prominently on the nose of Watershed Bourbon Barrel Gin. Meyer Lemon, bitter orange notes, fresh cut wood, and an intriguing cherry undernote whose low notes have peppery and vivid cinnamon stick. There’s a perceptible warmth to the nose as well.

The palate is bold, with plenty of loud flavors, many of which comes through on the nose as well. Citrus is especially prominent at first and through the mid-palate. Cinnamon comes on twice, once early, and then again, even more loudly towards the finish melding with peppercorn, allspice and clove-like notes. Juniper comes through as well towards the later part of the palate. lending a clean piney/herbaceous astringency that cleans up nicely. Fresh laid wooden boards with a dry, wood shaving note on the finish where you can pick out a bit more cinnamon, or naval orange zest as well. There’s a good deal of warmth on the finish as well, tasting quite potent; certainly an aged gin to warm the stomach and throat.

The loud flavors recommend itself nicely to cocktail-craft. I think the Negroni works quite well, but oddly in a Martinez, it seemed to steal the show, with a tad too much of the cinnamon and spice notes coming through. I enjoy this gin, especially on its own or dashed up with a bit of cherry bitters in an Old Fashioned. It wears its contemporary style on its sleeve, but unlike many other barrel aged gins, you seem to get more influence from the wood here.

Though Watershed Bourbon Barrel Gin tastes a bit dry, and young at times, it impart some nice balance and character to the spirit. You probably won’t mistake this for a Gordon’s or Beefeater, but for those in search of a contemporary aged gin with a bold, unique perspective, Watershed Distillery hits the mark. Recommended within its style.