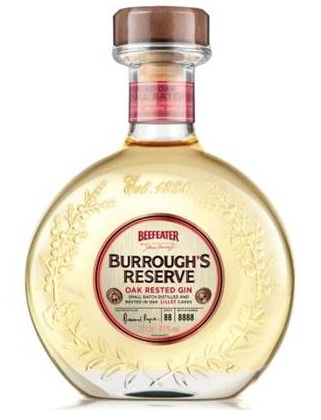 So-named for James Burrough, chemist, distiller, and mind behind the Beefeater recipe— he bought the well-established Cale Street Distillery in 1863, thereby also buying the 1820 date which is so often associated with the Beefeater brand.  The Burrough family carried on James’ company and gin recipe after his death…

Burrough’s Reserve Batch 1 was rested in barrels which formerly held the French Aperitif Reserve Jean de Lillet. The wine itself is a blend of three grapes blended with a bitter orange liqueur; the barrels are French oak. The resultant spirit has a lovely, gentle golden color. No age statement is available.

The nose begins with, lemon, orange peel, camphorous herbal mid-notes hinting at pine and rosemary at the same time, but never directly. A kind of amorphous multi-faceted nose that is inviting, but complex.

The palate begins with relatively soft, but creamy citrus. Lemon and bitter orange zest with a slight hint of vanilla and cherry. It fades gentle into a restrained juniper mid palate that’s slightly camphorous with a touch of pine. The late palate begins to showcase a whole melange of spices: nutmeg, cubeb before the finish kicks in: honey tinged, astringent oak and the slightest hint of oxidized wine.

The finish is moderate to long, with a lot of oaky note. Somewhat stark and dry, and becoming even more astringent as the finish moves along. Finishes in a way that dries the palate, the overall affect is relatively heavy on the wood.

So Burrough’s Reserve is designed to be sipped neat and not mixed. For the first time ever, we actually took their advice. [and at this price point, $70, you probably don’t want to be mixing with it]. I did sip it neat and found it to be smooth, and quite enjoyable. It was very easy to drink and clearly the overall design of the spirit, bringing it to market and a relatively modest 86 Proof, has contributed to that. Mixed with ice, we found some of the creamy and earthy notes a little more muted; the same from the freezer. It was good, but the chilling merely dulled some of the sensation. If you bought Beefeater Burrough’s Reserve Batch 1 and found it “too flavorful,” than perhaps ice or chilling might be for you. I would recommend against it, and even suggest that you drink it neat.

Okay, you got me. I thought it worked quite well in a Martini as well. There’s a lot of notes that a good pairing spirit could bring out of here. A good vermouth will highlight some of the herbal overtones and color in the oxidized low notes; an Alaska Cocktail with a touch of yellow Vermouth also brings out the herbal overtones, but instead gives it a greater depth to the floral notes. They taste almost vegetative, and impressively the creamy, almond and vanilla, oak and lemon notes still come through on the finish. Quite nice.

At this price point, I’m reluctant to give it an over-the-top recommendation. It’s a well-made spirit. It’s good, it works, and it’s enjoyable neat or in a martini. But at $70 [or in the UK I’ve seen it an even more heinous 70 Pound] it’s more of a luxury or status-buy than a must-have.

Side by side, I prefer Batch 2 to Beefeater Burrough’s Reserve Batch 1, but if you’re still able to find a bottle it’s a good aged gin and one that dedicated aged gin enthusiasts are sure to enjoy.