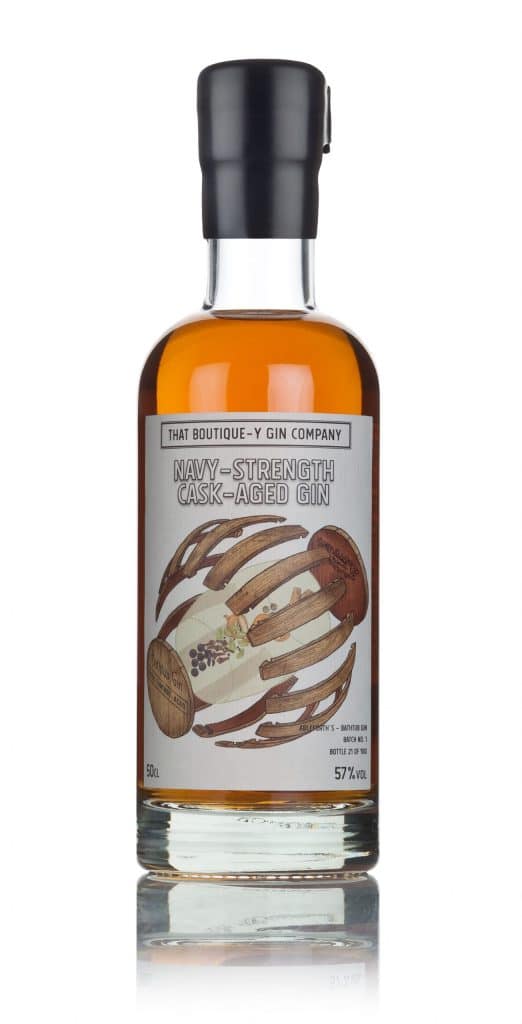 is an independent bottler located out in the UK which sells a wide range of whiskys from famous distilleries; often rare and quite old. I can only presume that the Boutique-y Gin Company has to be from the same crew behind those whiskys.

This gin appears to be the Cornelius Ableforth Bathtub Gin, aged for an unspecified time in Palo Cortado Sherry barrel, which are something of rarity themselves. Made traditionally, Palo Cortado is an accidental Sherry caused by not quite becoming an Amontillado and instead oxidizing and becoming something like an Oloroso. Sherry producers today can try to coax a Palo Cortado with a little bit of climate control and some grapes with more Malic Acid*. It’s a little less accidental but still retains some of the romance.

Hints of sherry, oxidized grape, vanilla, cinnamon and nutmeg on the nose. Spices pre-dominate, but with a heavy dose of ethanol fumes. As it breathes a bit, cloves, sweet cinnamon, and a touch of oak come through as well. Very complex, very intriguing nose.

The palate is incredibly complex, with several different passes of flavor. It’s an incredible experience from start to finish if you pause and observe patiently:

At first, a slow, but loud build with lemon and orange zest, juniper, and cinnamon building sharply. Then, mid-palate, it makes an abrupt change of pace wherein hints of red grape, vanilla cream, and suggestion of dark spiced rum. Next, it shifts again, this time to a more spice forward, orange zest, cinnamon, nutmeg and cardamom. The finish then takes another final turn, this time with an incredibly literal note of sherry accompanied by a lasting warmth and fumes of warmed cinnamon and caramelized orange rinds.  Really quite lovely.

This is certainly a complex, limited edition spirit worth appreciating on is own merits, simply on its own. I don’t recommend mixing it. Except perhaps, with a couple of ice cubes.

A captivating and intriguing flavor experience that gets points in my book for being bold and experimental. The complexity brought on by the myriad of processes: the bathtub maceration production method, the high proof and the time in the barrel reveals a spirit that is enjoyable in small quantities as an exploration, but ultimately might be a little too chaotic. It does so much that that it doesn’t quite come together.

Critiqued as a spirit, the Navy Strength tends to be best suited for cocktails, and aged gins tend to not be versatile mixing spirits. Combine that with the sherry notes, and you have a gin that just doesn’t seem to have a home anywhere other than on its own. So what, it doesn’t play well with others. It’s sure an interesting character that fans of aged gin and sherry might find to be a peculiar intersection of their two drinking passions.

*To read more from someone who actually really gets Sherry. [about Palo Cortado production]