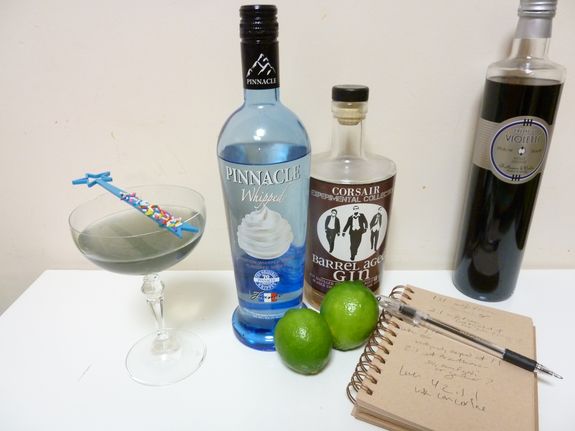 Notes on The Halja Cocktail

This piece was originally written for one of the weekly MxMo competitions in 2013. The Halja Cocktail has since appeared in several works including my book The Art and Craft of the Artisan Revival.

Firstly, you might be wondering about the theme and the name. The theme From Crass to Craft,Shake, Strain and Sip challenges us thusly: “Create or find a drink that uses one or more ingredients that are not considered “craft” but are or can be used in a “craft” cocktail.”

Back to the name ‘Halja.’ Yes, it is the origin of the name “hell,” but let’s back up again.  Hel was a goddess in the Norse tradition and her name [as well as the word from which our ‘hell’ comes from, the Protogermanic word Halja] means “one who covers up or hides something.”

This name seemed perfect for this. I’m hiding the fact that our main ingredient [a very specific kind of flavored vodka] is not really a craft ingredient by putting it in a drink where it not only shines- its most definitely the star- but its less desirable qualities are masked in beautiful fashion. Hence the name Halja, because frankly, I thought that it was going to require god-like capabilities to make the kind of drink I expect from top-end cocktail establishments with the kind of ingredient that rarely rises above the level of shots for college students who really haven’t acquired a taste for alcohol yet.

Process and coming up with the Halja Cocktail
How did I come up with this drink? I had no idea what I was going to make, other than that I was going to use this whipped cream vodka [I was really looking for the Waffle vodka, but when I struck out I settled for this one]. I sat down with my bar laid before and got to mixing. Experimenting.

I struck out with Navy Strength Gin [the juniper did not go] and regular classic gin. But I felt like I was on to something when I found that the Wigle Ginever actually went pretty well with the vodka. I started at 1:1, but the gin overpowered the milder vodka. At 2:1, you got just enough of the notes of the gin with the creamy sweet notes of the vodka. I knew this was going to be my base ratio.

But having as much gin as I did, I became curious if a barrel aged gin [which takes many of the great elements of a genever style gin such as Wigle] might improve upon this drink. And my friends, this was the eureka moment.

Corsair’s Barrel Aged Gin. It was sublime. Almost root beer like. You had the nice bright note of juniper, a creamy texture of vanilla and the warm oak.

While this was almost good on its own. I wanted to elevate it to the realm of cocktail-craft. I experimented with some liqueurs in small proportions, and various citrus fruits. A little bit of trial and error [quite a few actually] and soon I had a drink that “Hell! I actually want to drink this!.” And I promptly got to work making the full recipe to see if what I had stumbled upon was as good as the early tests were indicating.

The Halja Cocktail
4 parts Whipped Cream Vodka [okay folks, I’m not an expert on whether Pinnacle is comparable to the other brands out there. But for the sake of this recipe, Pinnacle works. Experiment at your own risk]
2 parts Barrel Aged Gin [If you don’t have barrel aged, a gin with white whiskey style base or a genever work really well- Wigle’s Ginever, Few Gin, Ingenium Gin. But I found that a little bit of oak really helped the gin to shine. I chose Corsair’s Barrel Aged, but there’s many others which will work well here too. ]
1 part Creme De Violette [I went with Rothman and Winter’s version here. I would stay clear of Creme Yvette or any other CDV clone which adds a lot of competing flavors. You want to preserve the delicate flavor of the vodka, not have it fight for its life]
1 part fresh squeeze lime juice [a little bit of citrus rounds this out. I thought lime showcased the vanilla more than lemon, but the lemon version was also quite palatable]

I shook with ice and strained. Served it up in a coupe glass.

I garnished in the way that I noticed many other garnished their “cake-tinis” and other flavored vodka drinks: with sprinkles. But in trying to maintain a level of sophistication that I felt a sprinkles-rim just wouldn’t do, I used a little bit of honey and spread a super thin later on a novelty cocktail stick. Then dripped into the sprinkles, allowing it to sit over the drink. I thought the sprinkles [oh god, can’t believe I’m saying this] actually complimented the drink favorably. But I am not willing to make them any more integral.

Cocktail tasting notes
Warm and vanilla like, root beer notes early w/ flowers coming on subtly but brightly, quickly fades, a hint of juniper and then a bit of citrus sweetness on the tail, Vanilla and oak on the close. Long and faintly souring. But basically you’re getting all of the creamy frosting notes of the vodka, without the after-tang. To top that off, the vodka is the star here, but everything else compliments it and rounds it out. It is quite honestly, delicious. 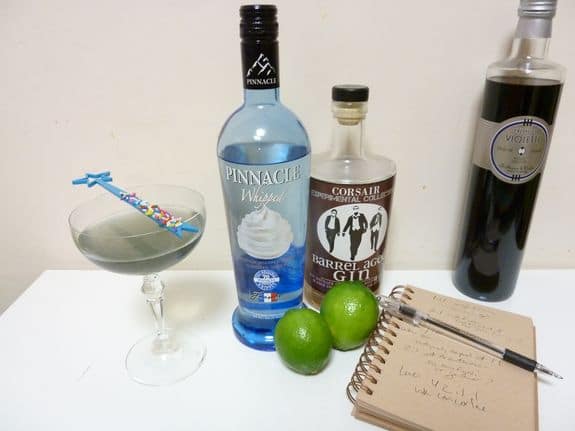 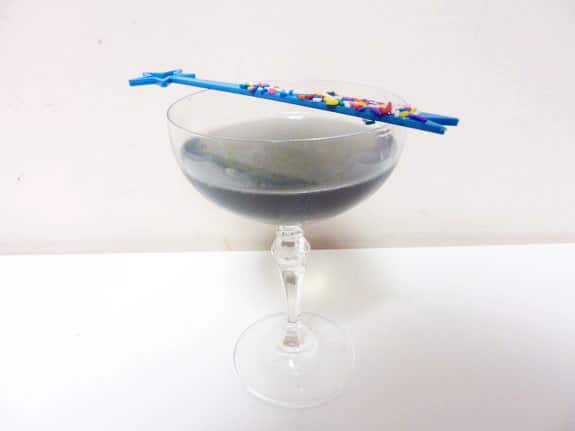 Closing Thoughts?
1) I would drink this if someone served this to me at a cocktail bar. And in terms of liquor content, it’s half crass. So drink up!
2) Barrel Aged Gin + Creme De Violette = not a great color. Dim the lights folks
3) Fun cocktail stirring sticks make a great touch for eccentric garnishes. Doesn’t it feel more magical?
4) Yes, whipped cream vodka. It’s not just for pre-gaming college students anymore.

Cheers! Let me know what you think if you whip this up. Or if you have any suggestions for other whipped cream vodka drinks w/ gin. Waffle vodka might have to wait until another day.